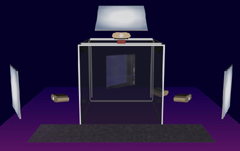 The CAVE is a projection based virtual reality system developed at the Electronic Visualization Lab; it was created by Carolina Cruz-Neira, Dan Sandin, and Tom DeFanti, along with other students and staff of EVL. More recent VR systems based on the CAVE are the ImmersaDesk and the IWall. The ImmersaDesk is a one-screen, drafting table style device. The IWall is a large, single screen display using four tiled graphics pipes for increased resolution.

The CAVE was first demonstrated at the SIGGRAPH '92 conference. Since then, more than two dozen CAVEs and ImmersaDesks have been installed at various sites.

The CAVE and ImmersaDesk are now commercial products sold by Fakespace Systems (formerly Pyramid Systems Inc); the CAVE Library software is sold and distributed by VRCO. For information on purchasing a CAVE or IDesk, or obtaining CAVE software, contact them.

Further information on the CAVE can be found in EVL's old official CAVE pages.

Technical info on the CAVE